TORONTO (August 10, 2020) — Lanny McDonald, Chairman of the Hockey Hall of Fame, announced today that the 2020 Hockey Hall of Fame Induction Weekend/Celebration has been postponed until further notice due to continuing consequences of the COVID-19 pandemic.

Rescheduling plans will be addressed when the Hall's Board of Directors meet on October 29, 2020. 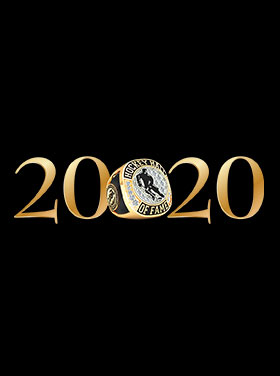 “We are fortunate that all of our staff are healthy and Ontarians have followed the governmental guidelines and principals, which will allow the Hockey Hall of Fame to officially re-open on July 15th,” said McDonald.  “The Hall’s top priority is the health and safety of our guests and staff.  To that end, we have worked on stringent protocols that adhere to the Province of Ontario’s stage 2 reopening guidelines.”

As a special offer for our reopening, Phil Pritchard, Hockey Hall of Fame Vice-President, Resource Centre and Curator, and “Keeper of the Cup” will be on-hand for photo ops alongside the Stanley Cup in the Esso Great Hall (its permanent location) on Wednesday, July 15th and Thursday, July 16th to enhance the guest experience. 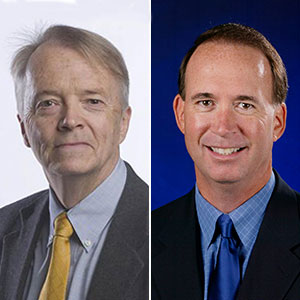 TORONTO (June 24, 2020) — Lanny McDonald, Chairman of the Hockey Hall of Fame announced today that individuals have been elected to Hockey Hall of Fame Honoured Membership, in both the Player and Builder Category. The vote took place today at the annual meeting of the Selection Committee in Toronto and remotely in North America and Europe.

Ken Holland has been elected into the Builder Category and Marian Hossa, Jarome Iginla, Kevin Lowe, Kim St-Pierre and Doug Wilson have been named to the Player Category.

The 2020 Hockey Hall of Fame Induction Celebration is tentatively scheduled on Monday, November 16th in Toronto (preceded by the traditional slate of “Induction Weekend” events beginning on Friday, November 13th, including the annual “Hockey Hall of Fame Game” hosted by the Toronto Maple Leafs). Due to the continued fluidity of developments surrounding the COVID-19 pandemic (including the NHL’s Return to Play Plan, etc.), the Hall of Fame is not accepting ticket orders for the 2020 Induction events at this time. Stay tuned for further announcements in the upcoming weeks which will be posted via HHOF.com and other HHOF social media platforms. 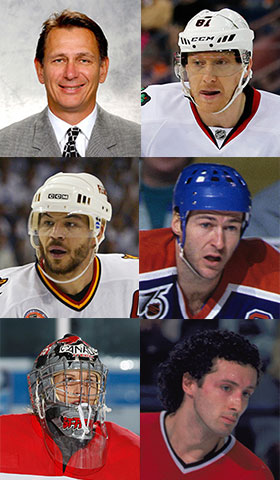 The stick used by backup emergency goalie for the Carolina Hurricanes, David Ayres, is on display in the Honda NHL Zone's NHL Today showcase at the Hockey Hall of Fame. David, who is a Zamboni driver and the Operations Manager at Mattamy Athletic Centre, became a hockey and internet sensation when he became the first emergency backup goalie to win an NHL game as well as the oldest goalie to win a game in their first appearance in the NHL on February 22nd, 2020 in the game between the Carolina Hurricanes and Toronto Maple Leafs.

Ayers will be returning to the Hockey Hall of Fame for a special Q&A session on March 16th. Click here for more details on March Break at the Hall. 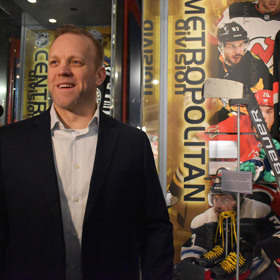 David Ayres was on hand February 28 as the stick he donated went on display.

This new display in the Tissot World of Hockey showcases Canada's hockey success on the world stage beginning with the first appearance of the game at the 1920 Olympic Games. This exhibit is full of golden artifacts that takes guests along a 100 year journey. From Olympic and World Championship gold from the men's, women's and sledge teams, to gold performances of teams at the World Juniors and Canada and World Cups. Highlights include a jersey and skates from the 1920 Olympics, the “Lucky Loonie” of the 2002 Olympics, 14 gold medals, sledge used in the 2006 Olympics and much more! 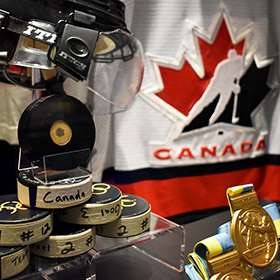 Keeper of the Cup Phil Pritchard takes you through the history of hockey in a new online course with Sports Management Worldwide! Expand your knowledge of the game, and hear behind the scenes stories of the greatest moments and people that make hockey the greatest sport. Over the 8-week course, you will hear from Phil as he shares first-person accounts and stories never before told, from the history of the game no one wants to talk about- the lies, corruption, and characters that have stained the respectful game- to life on the road with the Stanley Cup. He’ll examine the growth of the game, the digital age and what the future holds. 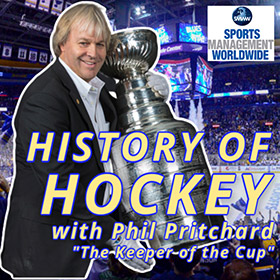 The Championship ring will be the most current donated ring of a special collection celebrating the current and past Stanley Cup champions, with the oldest ring in the collection presented to the Montreal AAA in 1893.

Crafted in 14-karat white and yellow gold, the ring celebrates the Blues journey and pays homage to the team, their fans and their city. Signifying the number of postseason victories, 16 genuine, custom-cut blue sapphires are arranged on the ring top, forming the Blue Note logo. Also highlighted in yellow gold are the words, STANLEY CUP CHAMPIONS. Beneath the logo, the Stanley Cup is made up of 45 pavé-set diamonds, surrounding the Cup are 30 more diamonds. When combined the 75 diamonds represent the 75 goals scored by the Blues during the 2019 postseason. Completing the ring top’s stunning display are an addition 115 diamonds set to create a cascading waterfall effect.

"We are very grateful to the Blues organization," said Phil Pritchard. "The 2019 Championship ring makes a great addition to the Stanley Cup Championship collection. Our guests, who visit us from not only St. Louis, but from around the world, will be thrilled to be able to view it."

Hockey fans will also be able to enjoy artifacts from the franchise’s first Stanley Cup win in the Championship display. 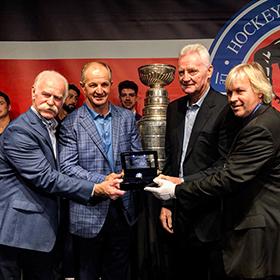 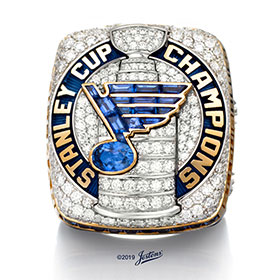 The 2019 St. Louis Blues Stanley Cup Championship ring is now on display at the Hockey Hall of Fame.

The St. Louis Blues have taken over the Stanley Cup Champions display case, the first in franchise history. 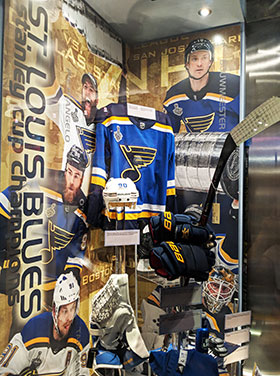 An exhibition unlike any other, paying homage to the most prolific scorers of our generations. Witness the greatest compilation of milestone artifacts and rare personal memorabilia, all hand-picked by Hockey Hall of Fame curators from the Howe and Gretzky family collections. Revel in the legacy and indelible bond of Mr. Hockey and The Great One.

Click here for more on the 9&99: The Howe • Gretzky Exhibition. 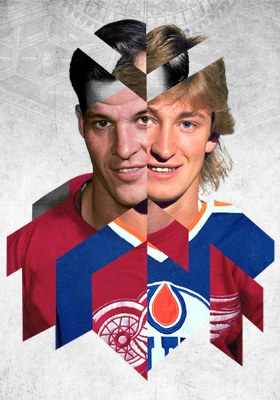 For generations, hockey fans have connected to the sport through a variety of media. Be it through John Wayne’s portrayal of a hockey player in the 1937 film Idol of the Crowds, the famed The Hockey Sweater book, or the cult classic Slapshot movie, millions of hours have been spent enjoying hockey away from the rink.

Hockey in Popular Culture, a new exhibit in Upper Deck Collectors’ Corner, shines a light on some of the ways the world of hockey has intersected with pop culture throughout the years. This showcase offers a one-of-a-kind glimpse at the way hockey has been depicted in film, music, games, literature and more. 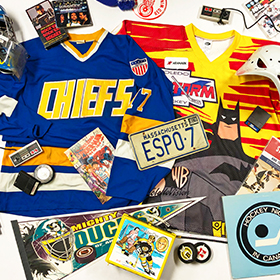 The Changing Face of
Hockey - Diversity in Our
Game Exhibit Unveiled

The Hockey Hall of Fame is proud to announce its newest exhibit, The Changing Face of Hockey - Diversity in Our Game. The permanent exhibit brings to light the challenges faced by marginalized people across North America in their struggle for social equality and acceptance in the great game of hockey.

The new display pays homage to the pioneers who confronted discrimination from the hockey world through their perseverance, talent, and courage. They have enriched the cultural landscape of hockey and established a tangible forum in which to fight prejudices still faced by many, both in hockey and in life. Highlighted within the new display are four significant issues that helped shape today's game - Ethnicity in Hockey, Marginalized People in Top Level Pro Hockey, Women in Hockey and Disabled Hockey. The Changing Face of Hockey - Diversity in Our Game promises to be an educational highlight to any school visit to the Hockey Hall of Fame. Stay tuned for a complete curriculum based Education Package designed to complement this exhibit. The new display will make its permanent home within the Hometown Hockey Zone. 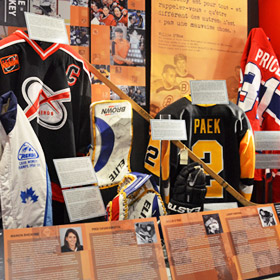 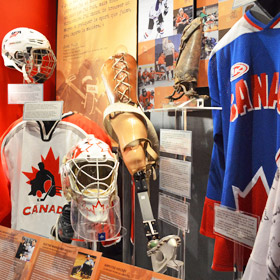 As part of the Hockey Hall of Fame’s 75/25 Anniversary Celebrations in 2018, the Hall announced the newly established Hockey Hall of Fame Development and Preservation Fund together with its first "designated endowment" program, namely The Larry and Judy Tanenbaum Family Legends of Hockey Scholars Fund supported through an endowment gift of $1 million from the Tanenbaum’s family foundation.

In activating the Legends of Hockey Scholars initiative, the Hockey Hall of Fame partnered with Connected North to deliver a series of six virtual field trip sessions to provide participating Indigenous schools with access to hockey-related content that is engaging and empowering. The curriculums included video tours of specific Hall of Fame exhibits, interactive class activities, as well as artifacts, historical footage and photographs from the Hall of Fame’s extensive archives.

Launched in March 2019, the program gave participating students the opportunity to complete a post-session assignment challenge and to be recognized as a Legends of Hockey Scholar including an all-expense paid trip to experience the Hockey Hall of Fame in Toronto, as well as a financial contribution towards their future education. Congratulations to the inaugural Legends of Hockey Scholar winners, Kerrigan MacLean and Marcus Allen from Mine Centre Public School in Mine Centre, Ontario. 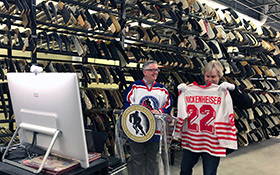 Retired Stanley Cup band featuring the engraved names of its champions from the 1953-52 to 1964-65 seasons preserved at the Hockey Hall of Fame. 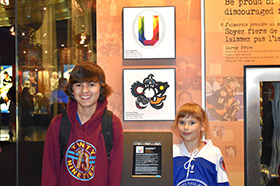 Legends of Hockey Scholar winners, Kerrigan MacLean and Marcus Allen visit their designs on display at the Hockey Hall of Fame – July 22, 2019.

The Tour App offers over 50 customized tours based on individual NHL teams, countries and positions, as well as a tribute to women's hockey, stories that inspire and surprise, plus scavenger hunts and games. Throughout the app, users have the ability to instantly capture and share their experience via social media and save their favourite moments during their Hall visit. 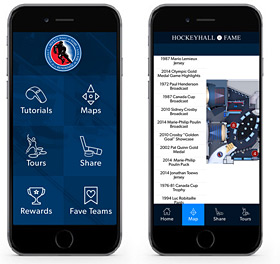 The Hockey Hall of Fame is always looking for donations of everything hockey (any league and all levels worldwide). We have placed an emphasis on Audio and Visual material. Specifically this includes audio, film and video (including outdoor home films and video), broadcasts and interviews, photographic slides, negatives and digital photos.

All donated material will be preserved within the state of art climate controlled Photographic and Moving Pictures archive at the D.K. (Doc) Seaman Hockey Resource Centre. The Hockey Hall of Fame is committed to preserving and sharing our fabulous collection with hockey fans from all over the world. And thanks to the generous support by way of donations from families, teams, leagues and federations we have been able to achieve this goal for decades. 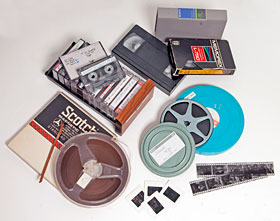 From hockey's earliest origins to the Great One and beyond, Canada's great game is now being taught exclusively on-line. A credit course at Seneca College in Toronto, titled The Hockey Hall of Fame Presents, provides the opportunity for students across North America to participate.

The Hockey Hall of Fame and Seneca College's Faculty of Continuing Education have combined to create this landmark and award-winning on-line course, which takes a serious look at the history and evolution of the game. Each week's topics examine the cultural, social and economic impact hockey has had on Canada.

For further information about on-line course, click on the site:
http://fcet.senecac.on.ca/fcet/fcet_hockey/can699# or contact Seneca College Media Relations at 416-491-5050 ext. 2656.