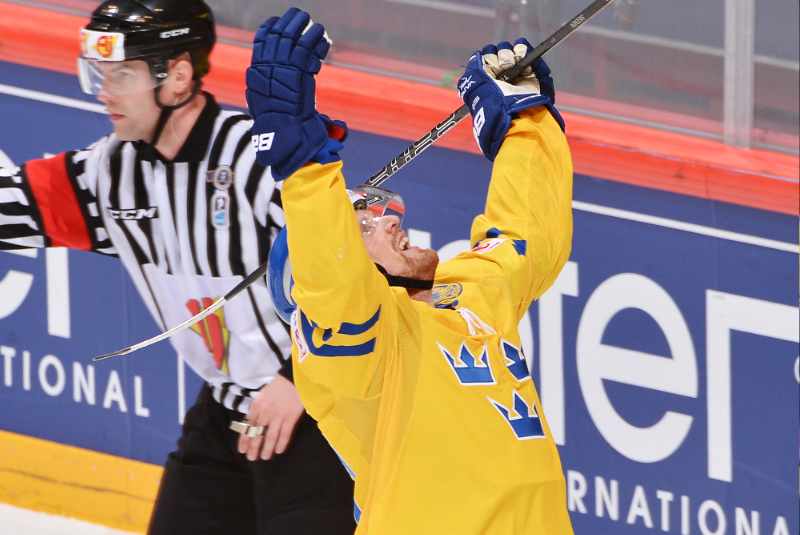 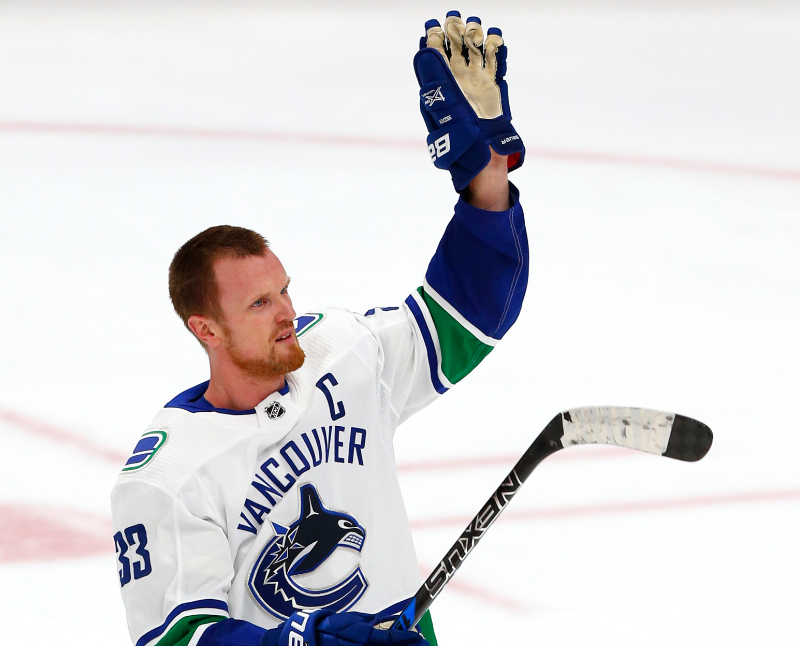 Sedin salutes the crowd after playing his final game in Vancouver. (Perry Nelson/HHOF)

Henrik Sedin was one of the league’s most productive players during his outstanding 18-season NHL career. Teamed with his twin brother Daniel, the Sedins were the faces of the Vancouver Canucks franchise for almost two decades as well as significant contributors to Sweden in international play.

Henrik Sedin was born six minutes before his identical twin brother on September 26, 1980 in Örnsköldsvik, Sweden. The two began playing organized hockey when they were eight, although they did not regularly play on the same line until Daniel switched from centre to wing when they were 14. By the time they were 16, they had turned professional with Modo Hockey in the Swedish Hockey League and in their second year with Modo, they were named co-recipients of the Golden Puck as the Swedish player(s) of the year.

The Sedins were considered top prospects for the 1999 NHL Entry Draft, but it would have been unlikely that they would be drafted by the same team. Vancouver Canucks general manager Brian Burke, who already had the third overall pick, was able to trade for the second overall pick, and used these selections to choose Daniel and Henrik. The brothers chose to return to Sweden for one more season with Modo, then made their NHL debuts in the opening game of the 2000-01 season, becoming just the fourth pair of twins to play in the NHL.

Sedin salutes the crowd after playing his final game in Vancouver. (Perry Nelson/HHOF)

Henrik was the Canucks’ leading point-scorer from 2007-08 to 2009-10. In 2007-08, Henrik was selected to play in the NHL All-Star Game; the first appearance of his career. That season, he led the Canucks in scoring. The following season, Henrik finished tied with his brother for the team lead in scoring. In 2009-10, Henrik was the recipient of the Art Ross Trophy as the NHL’s leading scorer, won the Hart Memorial Trophy as the league’s most valuable player and was named to the NHL’s First All-Star Team. With a league-best 83 assists, he also established a franchise record for assists in one season. In the subsequent playoffs, Henrik added 14 points in 12 games.

Prior to the 2010-11 season, Henrik was named the Canucks' 13th captain in team history. That season, he played in the NHL All-Star Game and went on to finish fourth in league scoring, including an NHL-best 75 assists, earning him a berth on the First All-Star Team. As it turned out, Daniel won the Art Ross Trophy that season, the first time brothers had won the honour in consecutive years. That season, the brothers had led the way to the franchise’s first Presidents’ Trophy as the team with the best regular season record with a franchise record 117 points. Vancouver then rolled through the playoffs, facing the Boston Bruins in the Stanley Cup Final, but lost in seven games. That summer, Henrik and Daniel were named co-recipients of the Victoria Scholarship as the Swedish athletes of the year.

During the 2011-12 campaign, Henrik was named to his third NHL All-Star Game appearance. Vancouver went on to collect its second consecutive Presidents' Trophy, aided by Henrik’s production, which contributed 67 assists to lead the NHL for a third consecutive season.

There was another NHL lockout to start the 2012-13 season, although the season began again in January 2013. During the abbreviated season, Henrik passed Mats Näslund as the franchise's all-time leading scorer with 757 points. He was awarded the King Clancy Memorial Award for perseverance and dedication at the conclusion of the 2015-16 season.

On April 7, 2018, Henrik and Daniel Sedin both played their final NHL game. Henrik played 1,330 regular season games through his career, and holds the Vancouver Canucks record for assists (830) and points (1,070). He also holds the franchise record for assists in one season (83 in 2009-10) and points in a single season (112 in 2009-10). At the conclusion of the season, the brothers were co-recipients of the King Clancy Memorial Award. In February 2020, Henrik's number 33 was retired alongside his brother's number 22.

Both Sedins proudly played for their country when asked. Henrik played in three IIHF World Junior Championships for Sweden. He is a two-time Olympian, winning a gold medal at the 2006 Winter Games in Turin, and in five IIHF World Championship tournaments, Sweden won gold in 2013 and bronze in 1999 and 2001. In 2016, Henrik was named captain of Team Sweden at the World Cup of hockey.

Henrik Sedin won acclaim as one of the best forwards of his era, and as a result, was inducted into the Hockey Hall of Fame in the Player Category in 2022.

Be the first to find out about the Hall's Induction Weekend events as they are confirmed, plus other special promotions and perks by signing up for HHOF Teammates.
Click here to join.